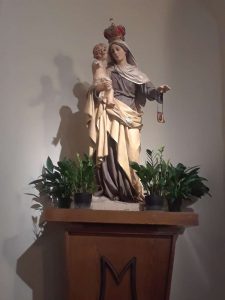 Mount Carmel is a biblical place where the prophet Elijah dwelt.  It rises 1,742 feet above sea level and towers above Israel’s Mediterranean coastline.  It was here where Elijah prayed to God for the salvation of Israel, which was suffering a terrible drought at the time.  He continued to pray and sent his servant up the mountain several times to look for rain.  On the seventh try, Elijah’s servant returned with good news.  “Behold a little cloud arose out of the sea like a man’s foot” (1 Kings 1:44).  Soon thereafter, torrential rains fell upon the parched land and the people of Israel were saved.

Elijah saw the cloud as a symbol of the Virgin mentioned in the prophecies of Isaiah (Isaiah 7:14).  The hermits who lived on Mount Carmel followed Elijah’s example and prayed for the advent of the much-awaited Virgin, who would become the mother of the Messiah.  The origins of the Carmelite Order can be traced back to Elijah and his hermited disciples.

In the 13th century, during the Crusades, St. Simon Stock joined a group of hermits on Mount Carmel during a pilgrimage to the Holy Land.  In 1247, he was elected the 6th superior-general of the Carmelites at the first chapter held in Aylesford, England.  However, the order had difficulty gaining general acceptance and suffered much persecution and oppression from secular clergy and other orders which prompted the monks to have recourse to the Blessed Virgin in the year 1251.

On Sunday, July 16th, 1251, as Simon Stock knelt in prayer, Our Lady appeared to him, holding the Child Jesus in one arm and the Brown Scapular in the other.  She uttered the following words:

“Hoc erit tibi et cunctis Carmelitis privilegium, in hoc habitu moriens salvabitur”
(This shall be the privilege for you and for all the Carmelites, that anyone dying in this habit shall be saved)

On January 13, 1252, the order received a letter of protection from Pope Innocent IV, defending them from harassment.

St. Simon Stock lived a holy life for 100 years and died in the Carmelite monastery at Bordeaux, France on May 16, 1265.

The scapular of Our Lady of Mt. Carmel, also known as the Brown Scapular, is one of the most popular and celebrated of Roman Catholic devotions. The sacramental (as the lay faithful commonly use it) is a miniature derivative of the actual brown scapular used by the Carmelites – the sleeveless outer garment falling from the shoulders which is worn as a sign of their vocation and devotion.

Our Lady gave St. Simon a scapular for the Carmelites with the following promise, saying, “Receive, My beloved son, this habit of thy order: this shall be to thee and to all Carmelites a privilege, that whosoever dies clothed in this shall never suffer eternal fire…It shall be a sign of salvation, a protection in danger, and a pledge of peace.”

According to Pope John XXII, the Blessed Virgin gave him the following message in a vision-related to those who wear the Brown Scapular: “I, the Mother of Grace, shall descend on a Saturday (Sabbath) after their death and whomsoever I shall find in Purgatory, I shall free, so that I may lead them to the holy mountain of life everlasting.”

Based on Church tradition, three conditions need to be fulfilled to obtain the benefits of this Privilege and the Scapular:

In order to receive the spiritual blessings associated with the Scapular, it is necessary to be formally enrolled in the Brown Scapular by either a priest or a lay person who has been given this faculty.  Once enrolled, no other Scapular need be blessed before wearing.  The blessing and imposition are attached to the wearer for life.

Our Lady of Mount Carmel’s Feast Day is July 16, the same day she appeared to St. Simon Stock. 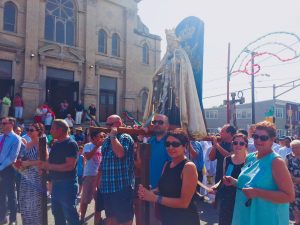 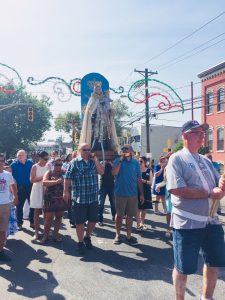 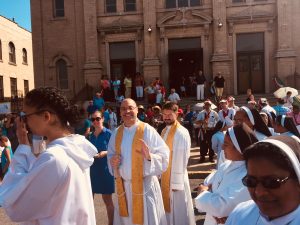